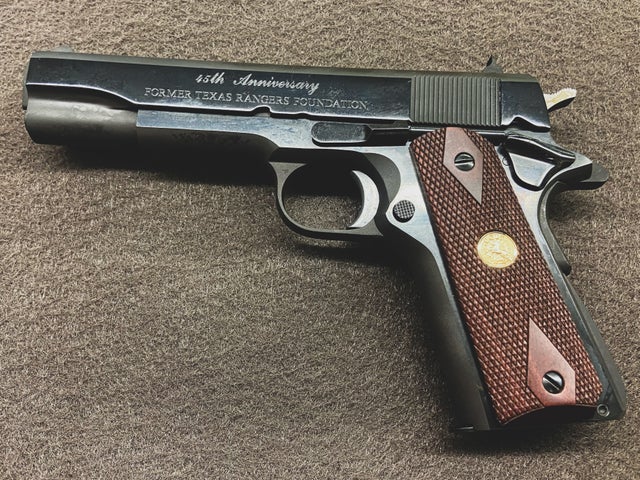 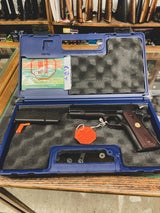 The M1911, also known as Colt 1911, or Colt Government, is a single-action, semi-automatic, magazine-fed recoil-operation pistol chambered for in .45 ACP. The Colt Series 70 once referred to Colt .45 ACP semi-automatics made in the 1970s. But now Series 70 can also refer to more recent reproduction guns. The fundamentals are the same as the original: nice looking, blued, reliable, and while not overly feature-rich, having most anything many people would want right out of the box. This is a full size single-action Government .45 ACP with a 5” long barrel. Overall length is 8.5”. Capacity is 7+1. The sights are non-adjustable and there’s a spur hammer and a tight group of narrow vertical serrations in back. The beavertail safety grip is medium length while the thumb safety and slide stop are beveled. The grips are classic and traditional double-diamonds. This means they are made of rich wood with long dark grains and diamond checkering. They also have the arrowhead (“diamond”) flat-head screw surrounds. The Colt Series 70 1911 is a rugged and dependable Colt that features high maintainability and repeated accuracy. Made in USA.